Understanding The 4 C's of Ruby Gemstone

Ruby is a precious gemstone variety that hails out of the mineral clan corundum. This beautiful July Birthstone arises in multiple shades of red color ranging from light pinkish red to a deep blood-red hue. With a Mohs scale hardness of 9, it is regarded as an extremely durable crystal and widely employed in traditional jewelry sets as well as contemporary gems trinkets. Another popular gem variety of corundum includes sapphires of all colors. Take a track with us beneath as we decode the 4 C’s of a ruby gemstone and endeavor to understand the optimal quality traits of this stunning stone.

The quality of the ruby, aka Manik gem, is determined via the four main criteria i.e., 4 C’s. These four pillars consist of the cut, color, clarity, and carat weight. Just like diamonds, all four criteria are well described and equally weighted in the evaluation of most natural gemstones. However, in the case of ruby, the proportion is slightly different, since, color is the most important factor here. The 4 grading factors and the origin comprehensively assess the market value of rubies. Let us check each of the four criteria of ruby stone to know this majestic gem better and make an informed decision while buying.

When it comes to gemstones, the term ‘cut’ itself carries several definitions.  For instance, it can be used to state the shape of a gemstone or depict the faceted style of a stone. It may also refer to the symmetry, proportion, and overall dimensions of a stone. In a finished gemstone, the cut correspondingly defines the relative size and number of facets it has, the precision with which facets are meeting, and the polish quality of the stone’s luster.

Alike any transparent crystal, natural rubies also get their best beauty owing to the way they cut. Although, since the rough of ruby is highly valuable, lapidaries and gem vendors emphasize retaining the maximum weight of the stone during the cutting process. Even most buyers also tend to accept ruby without a precision cut. Generally, gem cutters adhere to the following guiding principles when they shape ruby stones.

However, ruby is considered a pleochroic crystal, (Pleochroism is the visual property of a gemstone showing a change in the shade when viewed from different angles) it is best priced for its rich red color. Therefore, adept gem cutters emphasize influencing the apparent hue of ruby that maximize the brilliance of the gem. 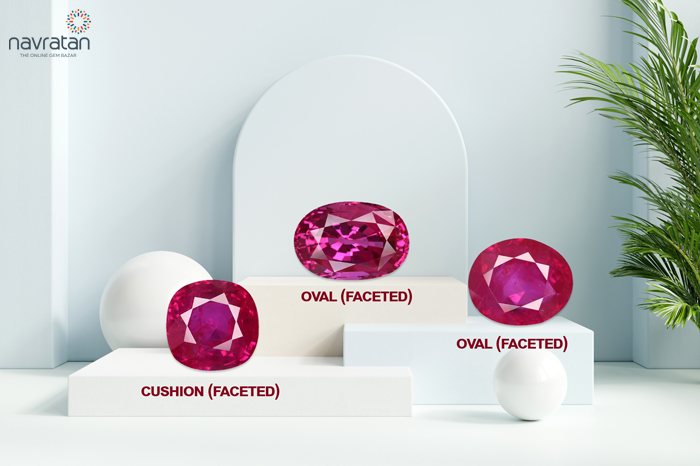 A skilled craftsman knows the value of a crystal clear piece of ruby stone with well-saturated color. So he or she usually prefers to minimize the visibility of undesirable inclusions and color zoning during the cutting process. At the same time, they focus to sustain the maximum final weight of the stone. This may be constrained by the growth form or crystal habit of the ruby gem.

Every consumer comes up with different priorities and preferences. So rubies are commonly cut so that the desired color and style are observable via the crown of the crystal. A learned lapidary or a trained worker always strives to serve the consumer with the best piece. They work to accomplish customer directions regarding certain cutting or fashion styles.

However, at various points in time, these legends may clash with each other. At times, craftsmen are bounded to retain a certain carat weight at the cost of compromising the color or clarity of the stone.

Ruby arise in a vast range of pink to red color. Henceforth, historically, it has been quite tough to define the exact color variation in this precious stone. There were several descriptive terms or eccentric names used to define the red hue variation of ruby.

The finest-quality rubies from Burma ruby (Myanmar) are still termed ‘pigeon blood rubies’. However, rubies, carrying the same quality premium color, but arising from other origins such as Mozambique or Madagascar, are also named after pigeon’s blood. For centuries, gem agents and vendors use descriptive terms like ‘saffron’, ‘pomegranate’, ‘partridge eyes’, and 'china rose' to classify distinct shades of ruby gemstones. Although, such terminology is not universally acknowledged but local customers were compelled to rely on them.

At present, the gem market is pursuing a more universal approach to assessing color in ruby gems which is described primarily by the hue, tone, and saturation. The ideal color description in ruby comprises vivid red, medium red to dark red, and slightly purplish red. While the base color of a ruby is ‘absolute red’, at times, a tint of pink, purple, or orange shade is also found as a secondary hue. Most of the fine rubies from Burma carry a slightly purplish red color tone. In general, consumers prefer a ruby gem with a purplish undertone in comparison to an orangy red-colored ruby. 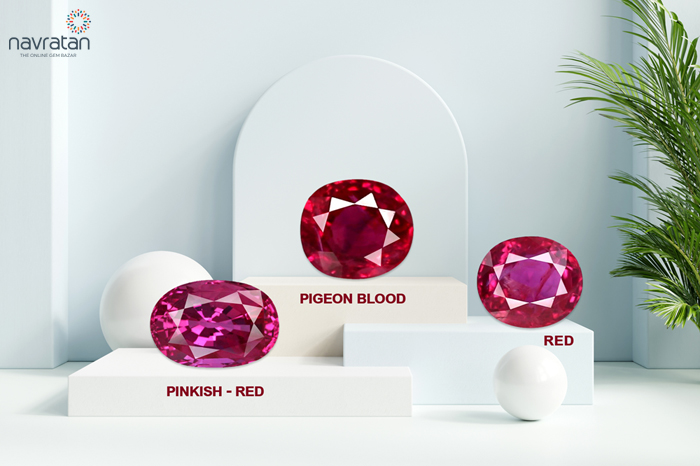 According to expert gemologists. ruby’s hue gets increasingly orange or purple with time, as a result, the quality and market value of the stone suffer a drastic loss. In the global gemological industry, the color segments of rubies are subject to considerable debate.

Several factors contribute to the color of a gemstone. If it has the potential to fluoresce, the red tint of a ruby can be boosted. Inclusions are mostly measured as substandard for any gemstone. Though it is not so. Sometimes, inclusions also help to enhance the color of a ruby stone. Minute needles of rutile silk-like inclusions work favorably in the case of natural rubies. Being highly reflective, they disperse the light within the stone that eventually refines the color. The color of a ruby stone also largely depends on how it is cut. A learned gemstone cutter crafts a ruby gem in a way where it displays utmost brilliance and flaunts the best pleochroic color with minimum color zoning. The best practice to assess a ruby’s color is to compare it with an actual stone. Today, many renowned gem testing laboratories are using a set of master stones and consider their tone and saturation to distinguish and examine if the given corundum is a ruby or a pink, purple, or orange sapphire.

Color saturation is a key component in evaluating the value of any colored gemstone. Saturation refers to how intense the color of a stone is and how well it emerges out. Rubies that hold high saturation levels tend to have more trace elements of chromium, which is the key reason behind color-inducing. The best part about this member of corundum is that it can attain a highly saturated color level without getting darker in tone.

Typically, rubies with vivid saturation are the finest quality rubies. Whereas ruby stones with ‘strong’ color saturation are highly prized in the international gem market. While brownish red colored rubies are regarded as poorly saturated and fetch less value in the market.

On the contrary, ‘Tone’, which also vastly influences a ruby’s value, defines how light or dark the color of a stone is. Most ruby gems in the market hold medium to dark color tones. When it comes to the color of ruby, it should neither be so dark that it seems dusky and obscured, nor too pale or light that it appears indistinct or diluted. Even if the color saturation is fine but the color tone of a ruby is too light, it may be deemed as a pink sapphire. Contrariwise, on the account of their dark color tone, most rubies of Thailand origin are classified as having a “garnet red” color.

Star ruby is a variety of ruby stone that comes with a star-like illusion. These specimens of ruby arise in all shades of pink and red. Nonetheless, the most sought-after shade here is again the same vivid and medium-dark red.

Owing to the excessive silk they contain, star rubies barely gain the well-saturated bold red color. Those few transparent pieces are highly desired and draw high prices in the market.

Since Natural Rubies are host to a diverse range of inclusions, very rarely do they exhibit as high clarity as fine diamonds do. This is so persistent in the gem industry, that a ruby with no inclusions is usually seen with the suspicion that it can be a synthetic or a glass imitation stone.

Inclusions are a result of the natural growth of a gem. Though inclusions in ruby crystals vary depending upon the place of origin and treatment, most rubies have some or other sort of inclusions. Even from the fine-quality stones, you cannot expect them to be completely inclusions-free, particularly when viewed at 10x magnification. 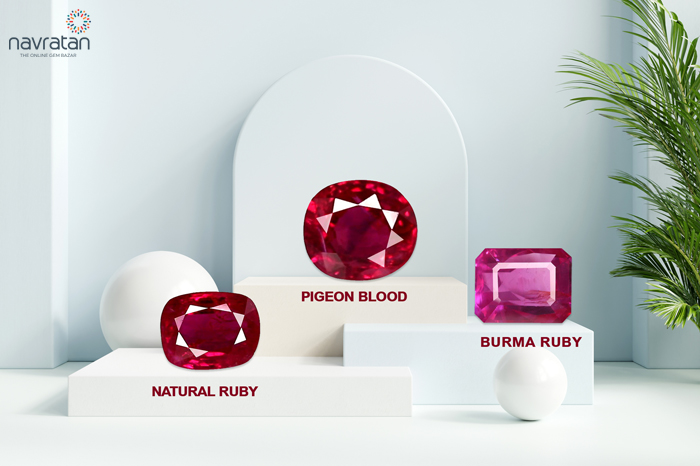 In natural or unheated untreated rubies, ‘eye-clean’ is regarded as the best clarity grade. Such rubies exhibit no inclusions to the naked eye. As clarity plays a crucial role in evaluating the value of a gemstone, experts consider every minor detail regarding the same, including the size, number, place, and comprehensive visibility of the inclusions. When a ruby stone, which carries a large number of silk inclusions, is cut as a cabochon, it displays rutile needles forming a star of six rays. These rubies are termed as star rubies. Seldom they can have a twelve-rayed star, a doubling effect due to the added presence of hematite needles. Because the formation of these stars is due to silk inclusions, these rubies never attain the degree of clarity a faceted stone does. Regardless, a star ruby with higher clarity is valued higher in monetary terms.

The situation of silk in rubies also depends upon their treatment history. The majority of rubies in the market are heated to enhance color and clarity. Undamaged silk is firm evidence of a ruby being unheated or untreated because the more heat is applied while the treatment process, rubies start melting and the silk factor begins to decompose. Trained gemologists, inspect ruby under magnification to find if the silk is degraded and recognize it as heated ruby.

Carat Weight is inevitable when buying or determining the value of a ruby stone. While a piece of 6 carats can be thought of little for an opal gem, a 4-carat piece of fine-quality natural ruby is considered large enough to achieve the attention of profound gem collectors.  As with any other precious crystal, the per-carat ruby stone price rises with an increase in every carat weight. 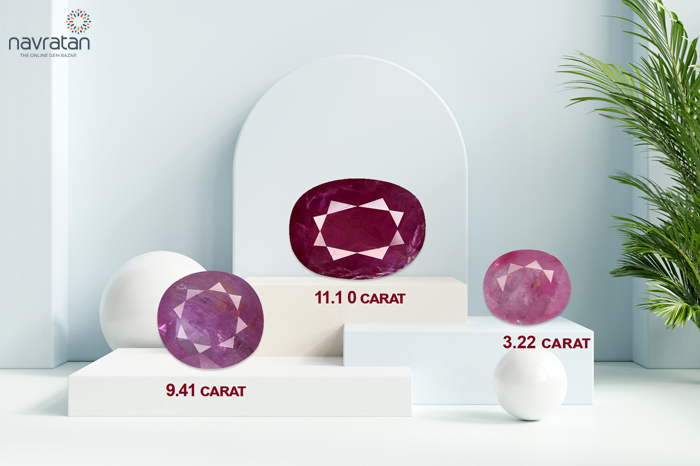