Home / Pearl and Its World

Pearl and Its World Pearl, also renowned as Moti, ranks among one of the most popular gems in the world. With the distinctive appearance and watery origins, natural pearls have symbolized the vision and lore for centuries. Pearl gem is a precious member of the nine Navratna gemstone family group. Due to the lustrous appeal and lavish presence, Moti Ratan has become a symbol of rare, fine, splendid, and lavish grace. Today we are going to know this beautiful gem and its world a little closer. Let’s get started. It is a white to bluish-grey colored organic, yet hard glistening kind of gem, produced inside the soft tissues of the body of a shell-like structured living organism called 'Mollusc' or other mammals like fossil conulariids.

On the ground of its chemical composition, Natural pearls are made up of calcium carbonate and phosphate combination. It primarily holds components of aragonite or a composite of both aragonite and calcite, in fine crystalline form. 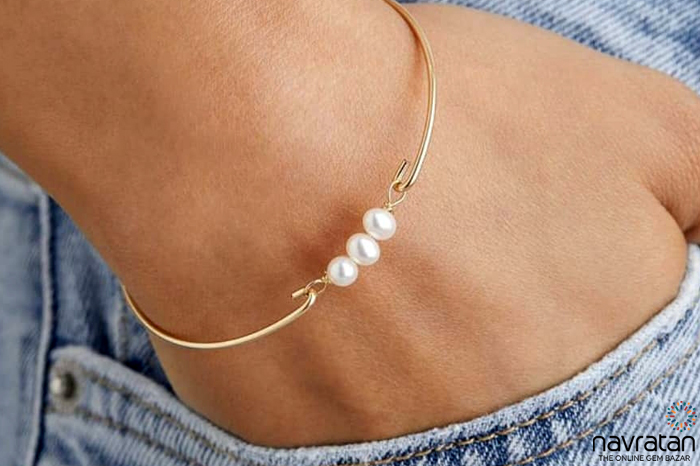 Besides the amazing soothing properties, pearl is known for its simple and calming, yet glamorous, beauty worldover. Owing to the serene beauty and extraordinary elegance, Pearl or Moti Ratan is denoted as 'The Queen of Gems'. Pearls make a perfect complement to the range of flashier gemstones. However, a pearl solely possesses that grace, which makes it stand out from the crowd and shine alone.

For centuries, the Moti Ring has been desired by royal families and astrologers because of its beauty and healing powers. Though there arise many other uneven shapes such as oval and baroque, a smooth and round-shaped pearl is the most sought-after variety. Pearl:- A Gem or Gemstone

Here comes the most interesting question about Pearl, is it a stone, a gemstone, or something else..? So just like others, if you are also confused and wondering ‘Is Pearl a gem or not?’ then you are thinking of it right. Let us study it in a little detail and clear out this confusion.

In general, Pearl or Moti is also stated as 'Pearl Gemstone' and 'Moti Stone', however, it is not technically correct. Whereas other members of the Navratna group are 'Gemstones', the pearl is not. Unlike other usual gemstone minerals, pearls are not formed under the earth's crust. They have organic origins. Natural Pearls are generally formed under seawater within various species of marine mollusks. Therefore, in simple words, Pearl is a gem, but not a stone. Alike other wearable gemstones, Moti Ratan is a valuable jewelry piece that has been admired for its beauty as well as cosmic energies for ages and eras.

According to western astrology, Pearl is termed as the birthstone of June month. This evergreen 'Queen of Gems' is known for carrying extraordinary healing properties with it. Keeping control over excessive anger is one of the key benefits of wearing a Moti gem. The favorable luck of this supernatural gem works wonders to develop an allure and interest in music, verses, expressive arts, and other artistic assignments. Besides enhancing natural instincts, wisdom, and self-confidence, pearl bestows its wearer with improved senses and greater peace of mind.

Moti gem is also known for developing mutual understanding between couples and bringing harmony in a relationship. Those people who deal in creative pursuits, such as theater, media, entertainment, painting, sculpting, writing, designing, or photographing, get highly benefited by wearing a pearl birthstone. Individuals, engaged in and intellectual ventures like geology, research, sports, lodgings, and jewelry operations, can also avail of remarkable benefits by wearing a pearl gemstone ring. Out of all the colors, varieties, and origins, Natural and unheated Moti is considered of the best quality. Though Natural Pearls are of high value, in order to avail the best desired results and the maximum astrological benefits, it is highly recommended to only buy certified Moti.