We, humans, are the biggest mystery of this super mysterious planet Earth. Though, the second biggest one is probably the stunning colored gemstones. For centuries, gemstones have been a center of attraction due to a number of reasons. Besides the mesmerizing beauty, the superstitious minds of human beings have always relied upon these supernatural stones on the account of their cosmic properties and amazing healing powers. They grab global praise and recognization owing to their appealing charm and mystical powers.

Though nowadays you have various options to buy gemstones online; sometimes gemstones, especially the precious ones, are not affordable by everyone. Owing to the high costs, they are not within the reach of a common man. At times, purchasing real gemstones turns out to be quite a tough deal to a certain extent. However, it does not mean that an ordinary person cannot avail of the much stated worthy benefits of these costly pieces of gems. Here gemstone substitutes or Upratans do the role.

What is an Upratna or gemstone substitute..?

In Vedic astrology, there are mainly nine different gemstones, known as nine Navratna Gemstones, that represent nine different planets of our universe. In general, these gemstones are considered a little costly, in such a case, there comes in the picture an affordable substitute for every gemstone, which is known as the Upratan or substitute gemstones. They are usually semi-precious gemstones that possess similar healing powers and astrological properties as their series of precious gemstones do. They are comparatively cheap but still quite effective on similar grounds. The mere difference is that the precious stones render benefits for a long time while their alternative substitute gives effects for short time. Though both precious and semi-precious stones resemble to a large extent, yet the benefiting powers of a semi-precious gem are relatively less in comparison to its primary precious gemstone. However, one can certainly avail definite results even through a substitute also.

Does a gemstone substitute or Upratan really work..?

Now the main question arises, are these Upratans or alternatives gemstones really advantageous..? Do these gemstones substitute work beneficial on the astrological ground..? So the answer is YES. It is proven by experienced astrologers and scientifically verified by learned gemologists that, providing to some factors, a substitute aka an upratan of a precious gem holds similar sort of favorable benefits for its owner as of the main gemstone.

Although the weight of the substitute gemstone is the key factor for determining the consequences. According to astrologists, the weight of such an alternative gemstone substitute needs to be comparatively more than the weight of its primary gemstone, or else it won’t deliver that many benefits to its wearer. Here is the list of some of the popular precious gemstones and their substitutes (Upratans):-

The rich red-colored Ruby is counted among one of the most beautiful gemstones around the globe. Owing to the super charismatic beauty and great healing powers, Burma Ruby is one of the rarest and most expensive gems worldwide. This precious member of the corundum mineral group ranges from light pink to a deep blood-red hue.

As per Indian Vedic astrology, Real Manik harnesses the blessings and positivity of the most powerful planet Sun. When it comes to buying, sometimes, this birthstone of July month may get out of the budget of many regular buyers. Henceforth, for those who cannot afford purchasing it, can go for its astrological substitutes. The best-known popular Upratans of the ruby stones are red spinel, red tourmaline, and red garnet. 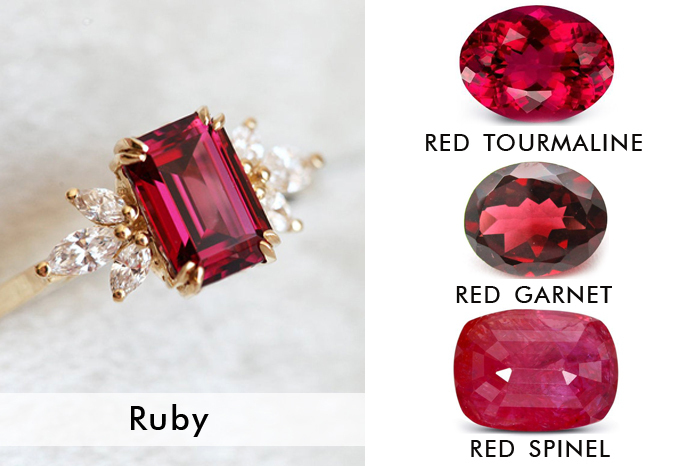 Red Spinel – Popularly known by the name ‘Spinel ruby gemstone’, this deep red-colored variety of spinel family is considered a valuable substitute for the precious Ruby stone. It is worn to gain stability and balance in life. Natural red spinel holds a deep metaphysical meaning within and hence is quite rare to found.

Red Tourmaline – This beautiful red-colored stone of the tourmaline clan gives a tough competition to many other popular red gems. Besides astrological uses, it is often used for making fancy pieces of jewelry. In addition, the incredible healing properties of a Red tourmaline stone give another strong reason to own your collection. Red garnet - It is said to be the stone of love and commitment. A Real Red Garnet brings around honesty, trust, devotion, sincerity, and mutual understanding in a marital or love relationship. Natural Red Garnet is considered extremely helpful in managing excessive anger and maintaining a healthy life balance. It revitalizes the emotional state, brings warmth, and enhances the sexuality of an individual. Garnet, being the birthstone of January month, usually arises in a variety of color shades like red, yellow, green, orange, etc.

Blue sapphire is one of the most precious and highly desired gemstones around the globe. After diamonds, it is said to be the hardest gemstones.  Due to the amazing transcendental properties and remarkably stunning looks, this treasured gem piece ranked amongst the highest adored gemstones worldwide. This birthstone of September month carries the power and blessings of planet Saturn or Lord Shani. However, owing to its renowned origin and quality, such as Kashmir Neelam, it may cost you quite high and can even drill a hole in your wallet. So we have a number of substitutes for this precious blue stone in the basket that carry similar benefits as a Natural Neelam do. They are Amethyst, Blue Topaz, and Blue Spinel. Captivating Blue Spinel is said to be one of the perfect alternatives for the blue sapphire gemstone. Though, it is widely known for healing the body as a whole but is mainly beneficial for the wearer’s eyes, throat, and gum disorders too. It also improves your stamina and boosts your memory. 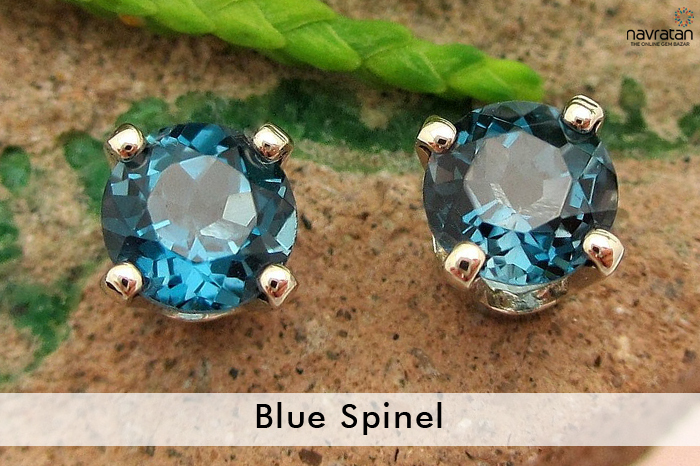 Amethyst is is another popular substitute for Neelam Ratan. It is seen as a natural tranquilizer for treating acne and nausea. This light blue-colored gem provides significant relief in abdominal bloating and breast pain. Amethyst works wonders to activates spiritual awareness in an individual. It dispels anger, relieves stress, and balances mood swings. It soothes the feeling of anxiety, fear, and irritability.

Another substitute for Neelam is Blue topaz. It is a gem that symbolizes love, loyalty, morality, and emotions. It inculcates the vibes of honesty and clarity of feelings in the owner. Gifting topaz to a person signifies an indestructible and committed appreciation for your loyal friendship and romantic relationship.

Emerald, popularly known as Panna, is an extremely precious stone that arises from light green to a rich greenish-blue precious gemstone. Besides holding a vital place in the astrological arena, it is a highly desired piece of a gem among global gemstone lovers. Sometimes, the finest quality of Emeralds, like Colombian Emerald or Panjshir Panna, can range even more than diamonds. This birthstone of May month is a prestigious member of the Beryl mineral family. It is considered a hard gem with a Mohs scale hardness of 7.5–8. However, natural emeralds are not always affordable for everyone. So, here are a few substitutes of this precious stone that deliver the same kind of cosmic powers to their owners. Peridot and Green Tourmaline are two such alternative gemstones of Emerald. Both these gems resemble almost similar to Panna and possess the same sort of astrological powers and benefits as an emerald does.

Peridot is a magnesium-rich silicate gem of the Olivine mineral family. It is a bright green-colored, semi-precious gemstone, which is worn for good health and to promote intelligence and communication skills. Whereas Green Tourmaline is a natural semi-precious gemstone of the Cyclosilicates mineral clan. Owing to the amazing healing therapy and stress reduction power, Vedic astrology recommends this October birthstone as the substitute for the emerald gemstone. Since ancient times, it has been used for body detoxification, emotional relief, and gaining protection against mental ailments.

Last in the list but never least, another precious gemstone in the lane is yellow sapphire or Pukhraj Ratan. On the account of its beautiful combination of charismatic beauty and supernatural orangish golden vibes, it is the highest-selling colored stone in the world. Since it is measured as a twin of Neelam and Manik stone, an original Pukhraj with a bright lemonish-yellow shade ranges quite high in terms of money. The two main alternatives of Yellow Sapphire are Citrine and Yellow Topaz gemstone. They not only carry similar looks but also possess similar benefiting properties for their owners. Moreover, both these substitutes are far more affordable than a precious yellow sapphire stone. Though Citrine derived its name from the French language, which means lemon, it is known as Sunela in Hindi. It is a dazzling yellow-colored gemstone that resembles a transparent pale yellow to an almost golden honey-colored hue. By strengthening self-confidence, the strong metaphysical properties and healing abilities of a Citrine helps in improving the digestion system and strengthening the psychic endurance of a person. The best part is that this mesmerizing beauty can be owned at a very affordable price. Yellow Topaz is a semi-precious affordable stone of the topaz mineral family that preserves a high place in Indian Vedic astrology. It is worn for growth in legal, administrative, and creative careers. The wearing of yellow topaz fetches success in academic and financial ventures. Besides providing marital and progeny bliss, a Real Yellow Topaz is effective in the betterment of physical and psychological health and social upliftment.

In order to grab the best astrological benefits out of your precious or semiprecious gemstone, it is always recommended to buy real gemstones. Connect Navratan, the online gem Bazar for the widest collection of all colored gemstones along with an authenticity certificate at the most reasonable price segment. You can get the assurity of purity, quality, originality, origin, and excellence through the world’s renowned gemstone laboratories GRS, GIA, SSEF, Gubline, and C Dunaigre. Call now for the latest offers.